Under the Jacaranda, 1903, R. Godfrey Rivers

Under the jacaranda 1903 has been one of the best loved works in the Queensland Art Gallery since it entered the Collection in 1903. Godfrey Rivers completed the painting 13 years after he arrived in Australia from the United Kingdom.

The work depicts Rivers and his wife Selina taking tea under the shade of a jacaranda tree in full bloom. The tree was a landmark in Brisbane's Botanic Gardens, which adjoined the grounds of the Brisbane Technical College where Rivers taught from 1891 to 1915.

It was almost certainly the first jacaranda to be grown in Australia. Walter Hill, the Gardens' Superintendent, planted it in 1864. It remained in the Gardens until 1979, when it was blown over during a cyclone - part of the trunk is now located at the offices of the Mt Coot-tha Botanic Gardens.

With jacarandas now growing in most Brisbane suburbs, many the progeny of this first tree, Under the jacaranda may be considered a quintessential image of this city.

Below we have included three digital features: (1) an slider that overlays the work with X-Ray photography, revealing hidden and over painted layers; (2) an essay with extended details on the work; and (3) a high resolution image feature that allows you to zoom in close to the work. 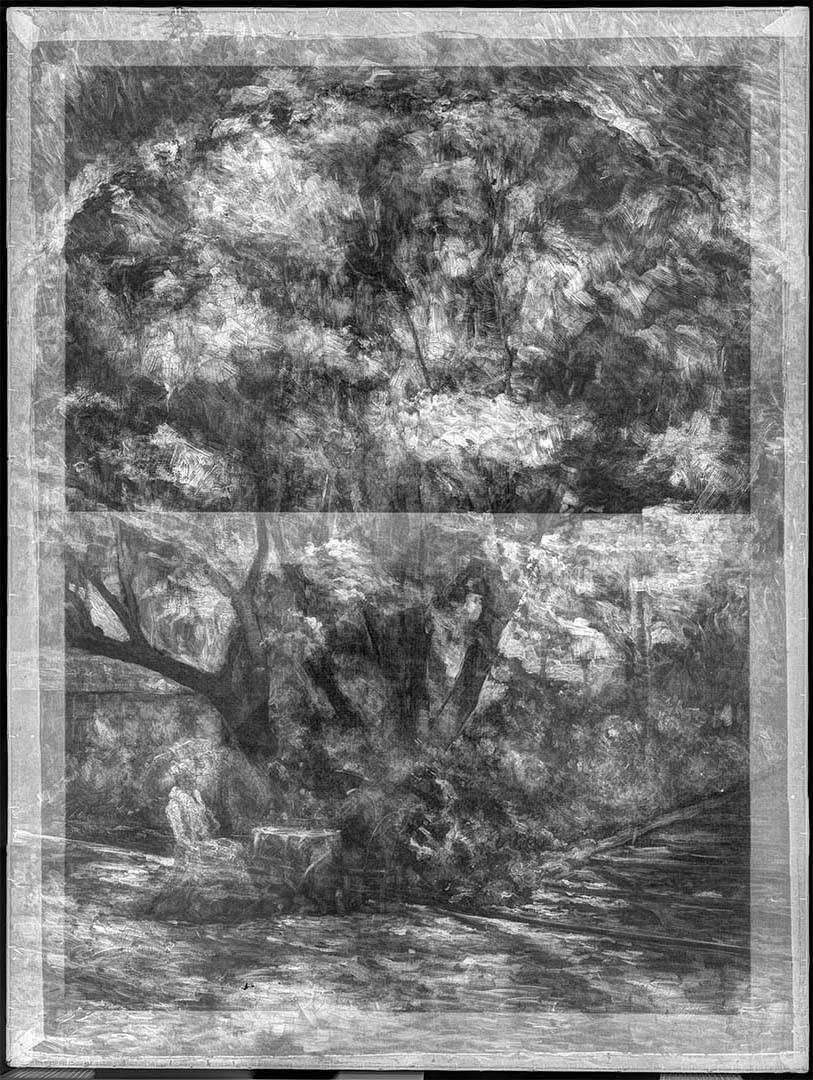 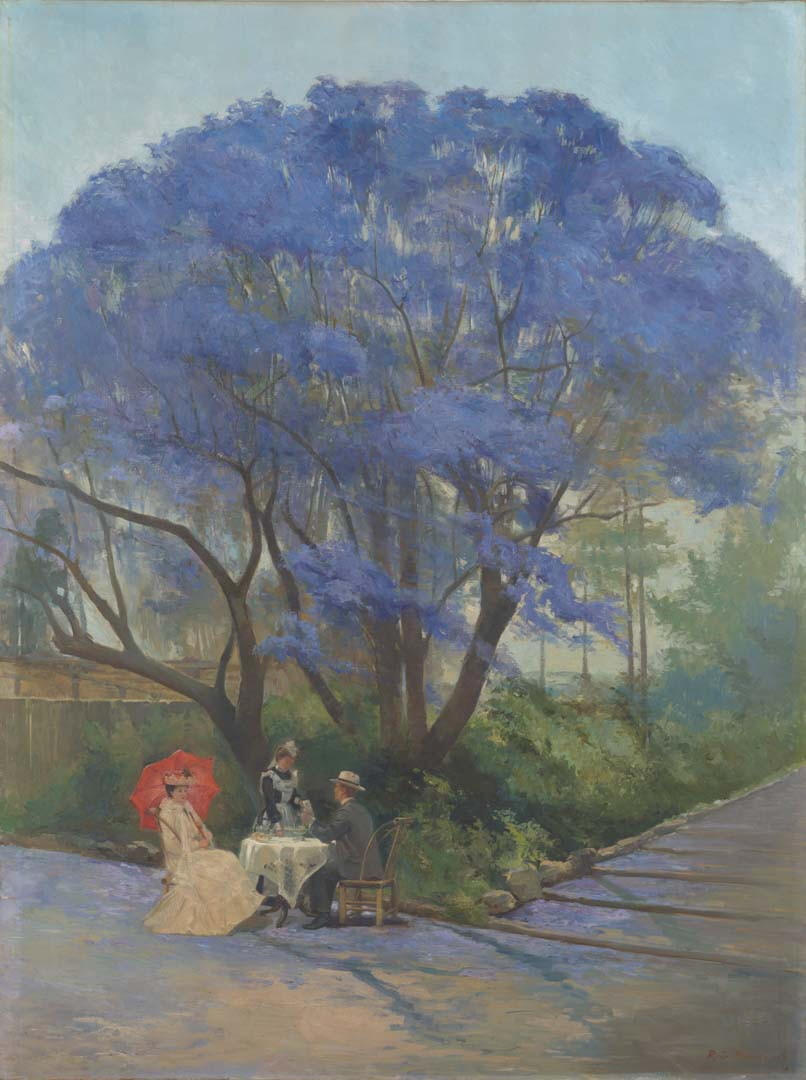 As part of the classifying fervour that dominated botanical science in Europe, and to exploit the new ranges of plant material that were being discovered in the far corners of the world, in 1855 the Queensland Botanic Gardens were established at Gardens Point, at the end of George Street, Brisbane, and Walter Hill (1819-1904) became their first curator. Hill would row his boat across the river to the wharves and place parcels of native Queensland plant seeds in the care of the ships’ captains, who would distribute them across the world. In reciprocation, plants from South America, including the jacaranda (Jacaranda mimosifolia); from India and South-East Asia, such as the flame of the forest (Butea monosperma); and from Madagascar, such as the royal poinciana (Delonix regia), were brought to Australia on these vessels, part of the thriving exchange of botanical specimens between far-flung acclimatisation and botanical gardens.

The Botanic Gardens were readily accessible to respected artist and teacher R (Richard) Godfrey Rivers, as his studio was in the adjoining Brisbane Technical College. It is easy to imagine he and his wife, Selina, meeting there for afternoon tea. In a work that would become an icon of the Queensland Art Gallery’s Collection, Rivers set two figures (ostensibly the artist and his wife) in rustic chairs under a jacaranda tree, along with a red umbrella and yellow garment, adding a personal and decorative element to the scene. A waitress serves afternoon tea, which is an authentic touch as the garden’s kiosk was nearby. The ground is strewn with the fallen blossoms that define Brisbane in late October and early November in this permanent reminder of the month-long display. Flying over Brisbane during this time reveals the mauve-blue haze over Hamilton Hill, New Farm Park and surrounding suburbs that has helped to shape our subtropical vision of the city, and increased our affection for Rivers’s spectacular https://collection-online-beta.qagoma.qld.gov.au/objects/5113">Under the jacaranda 1903.

When it was first shown, in the fifteenth Annual Exhibition of the Queensland Art Society in Brisbane's Albert Hall in 1903, the now iconic painting was met with great enthusiasm:

'Coming to the domain of landscape painting, the most striking painting in the collection is Mr Godfrey Rivers’s ‘Under the Jacaranda’ (No.39), a study of one of the beautiful trees of that species in the Botanic Gardens. The artist has depicted the tree in full bloom, when its luxuriant flowers seem like a lavender-tinted haze, while the ground is littered with fallen blossoms. Under this charming shade he has placed a lady and gentleman seated at a table enjoying afternoon tea. The subject is a very pretty one, and it has been very happily treated, the general scheme of colouring being exceedingly effective.(1)

The painting was purchased by the Trustees of the Queensland Art Gallery almost immediately for the then substantial price of £100, and it has had a presence at the Gallery ever since. Hoping to capitalise on this public approval, the following year Rivers exhibited another portrait of an individual tree, titled An alien in Queensland, at the Art Society’s annual exhibition. However, its reception in The Queenslander was qualified:

'. . . if [Rivers] had been content to take the tree and a small area of the trimly kept lawn, in the midst of which [the tree] throws its graceful shade, he would have produced a picture to which little exception could be taken, but the bandstand has also been introduced . . . The structure has a crowded look, and its presence detracts from the beauty of the picture.'(2)

Rivers clearly took the criticism of An alien in Queensland to heart, cutting the painting down and reworking it to remove all trace of the rotunda.(3) The work remained in the collection of his widow, Selina Rivers, until 1941, when she presented it to the Queensland Art Gallery as An alien in Australia (the original title having been mis-remembered). Both paintings are ostensibly of the same subject - an exotic tree species tree planted in Brisbane’s Botanic Gardens - yet Under the jacaranda has become one of the icons of the Queensland Art Gallery Collection, while the other is simply a well-regarded painting.(4)

The jacaranda in Rivers’s work has special significance: it appears to be an image of the first jacaranda tree grown in Australia, meaning that existing jacarandas are this tree’s numerous progeny. Native to the dry tropical forests of South America, the species arrived in Brisbane in the early 1860s. A review of the Queensland Horticultural and Agricultural Society's exhibition in 1865 stated that: 'Mr Hill exhibits . . . for the first time, a specimen of the shrub Jacaranda mimosifolia, which has a very pretty blue flower’.(5) A year later, the writer of the newspaper article ‘A stroll in the Gardens’ recommended viewing the jacaranda in bloom in the gardens,(6) and the tree was also being suggested as suitable for street-planting in coastal areas. It grew so readily that, by 1867, seeds were being distributed by the Acclimatisation Society for trialling around the state.(7) The jacaranda proved adaptable to Brisbane's subtropical climate(8) - a report of the Acclimatisation Society, Bowen Park, commented on the astonishing growth of a jacaranda which grew to nine feet within a year of planting.(9) By 1879, established jacarandas were being offered for sale by commercial nurseries.(10)

As Brisbane’s jacarandas are the progeny of the tree depicted, subsequent paintings of jacarandas - a popular subject for Brisbane artists - can be considered the progeny of Rivers's painting, making the work, like the tree, iconic in Queensland. Vida Lahey frequently chose to depict this subject in works such as Springtime in Brisbane 1932 (private collection, Brisbane), but nowhere was it more popular than in the work of Charles H Lancaster, who exhibited paintings with 'jacaranda' in the title in numerous annual exhibitions of the Royal Queensland Art Society between 1924 and 1958. The tree remains as popular with artists today.

While the bright orange blooms of the flame of the forest would have stood out against the dark greens of its home in the tropical forests of South-East Asia, in Australia, it was the showy blue jacaranda that drew the most admiration. A writer strolling through Brisbane's Botanic Gardens in 1886 passed by the butea, simply noting its orange blooms, before exclaiming that:

'The lovely jacaranda is perhaps the finest specimen of its kind to be seen in the colony. Not so brilliant in hue as the poinciana, nor so gorgeous as the bignonia, the delicate lavender of its profusion of blooms possesses a beauty peculiarly its own. For absolute loveliness it is unsurpassed by any of the magnificent flowering trees and shrubs which have been acclimatised here. The jacaranda, when in full bloom, is to a stranger a sight worth walking many miles to see. Seen from a distance among the green tops of sister trees, it seems as though shrouded by a beautiful blue cloud, but on closer inspection this gradually forms itself into myriads of delicate lavender blossoms, while the ground below is covered with a fairy-like carpet of the same tint, formed by the falling flowers.'(11)

Rivers did produce a sketch of a poinciana; had the artist been inspired to develop it, perhaps we would have iconic portraits of two of Brisbane’s trees instead of one.

The jacaranda of Rivers’s painting survived until 1979, when it was blown over in a storm. Part of the trunk, with an appropriate inscription, remains in the office of the curator of the Brisbane Botanic Gardens at Mount Coot-tha. A solitary specimen of the flame of the forest still blooms in the Botanic Gardens, as it has done since it was painted by Rivers.